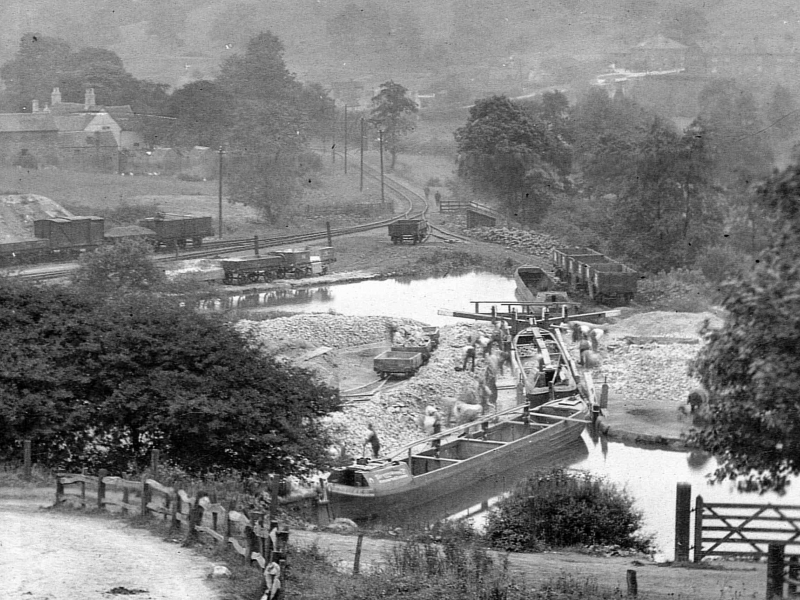 The Trent & Mersey company, worried by the dubious economics of the projected Uttoxeter Canal, delayed construction for 10 years. However once the go-ahead was given, John Rennie, the Project Engineer ensured the canal was built to a high standard. The Canal was completed in 1811, and the official opening, on the 3rd.September of that year, saw joyous celebrations in the town of Uttoxeter.

The canal was used to transport coal to wharves down the Churnet Valley and to Uttoxeter itself. Much of the coal came from the Cheadle area, which was linked to the canal by the Woodhead Tramway. The lime trade also produced traffic for the canal, with canal side kilns at Oakamoor, Rocester, and Uttoxeter. The Cheadle Brass Company used the canal to transport goods to and from their works at Alton and Oakamoor. Other goods moved by canal to Uttoxeter included iron, slate, and cotton, whilst out of Uttoxeter came pipes, tiles, timber, cheese, and bricks. Canal side brickworks at Oakamoor also provided traffic for the canal.

Despite this, it was essentially a rural canal, and without any major industrial centres, its finances were always going to be precarious. By the mid 1840s, the Uttoxeter Canal was losing £1000 per annum. - a huge amount in those days, and the Trent & Mersey company was planning to close it. This plan was overtaken by events as the Trent & Mersey Canal Co. was taken over by the North Staffordshire Railway, and the new owners closed it instead. Apart from the first lock and basin at Froghall, the rest of the canal was officially closed on 15th. January 1849, and the Churnet Valley railway line built on parts of the canal bed.

It is believed that the first lock and basin continued in use till around 1930.

Elsewhere, much of the canal that had not been covered by the railway remained in water. Over the years parts of this has been drained, whilst other parts have been drained and filled in. Although overgrown, other parts remain in water to this day, particularly between Alton and Crumpwood, where the weir constructed to raise the level of the Churnet to enable boats to cross from one side of the valley to the other, has recently been given listed status.

At Froghall, after the end of commercial traffic, the lock chamber, though devoid of gates, remained intact, as did the basin beyond. The lock was filled with dredgings in the 1970s.

In the early years of this century, plans were put forward by British Waterways, to restore the first lock and basin of the Uttoxeter Canal, to provide extra moorings. With financial support from the Single Regeneration Budget, and the European Regional Development Fund, plus support from the Staffordshire County and Staffordshire Moorlands District Councils, the Inland Waterway Association, plus many hours of volunteer labour from the Waterway Recovery Group and members of the former Caldon Canal Society, the lock and first basin were reopened with great ceremony in July 2005. The first section of the Uttoxeter Canal was once more connected to the network.